The following is a list of official hardware supported by the Native target that is the default compilation target of Black Magic Probe firmware. All revisions of the native hardware work with the same firmware binary. 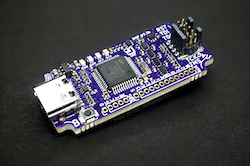 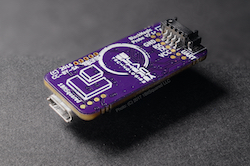 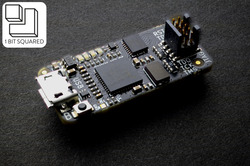 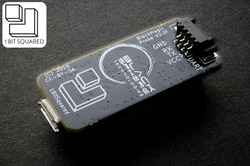 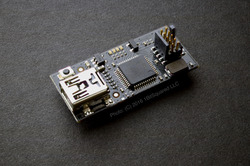 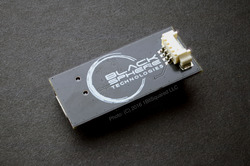 Small version of the Black Magic Probe also known as BMPM1. The form factor was inspired by the Floss JTAG FTDI based adapter. The board offers an ARM Cortex 0.05” 10Pin connector on the top of the board and a Molex Picoblade 4Pin UART serial connector on the back of the board.

The board has a MOSFET to switch 3.3V power supply to the target in place of the jumper on the original Black Magic Probe.

This board does not buffer the JTAG or serial pins in any way, they are connected directly to the STM32. 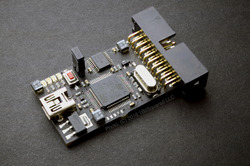 The original first hardware. Offers a legacy ARM JTAG 0.1” 20Pin connector. Some of the pins of the 20Pin connector carry TX and RX of a serial interface. This makes the connector not 100% compatible to a default 20Pin JTAG connector.

The board has a physical jumper to switch 3.3V power supply to the target.

JTAG IO is buffered through a TXS0108 Texas Instruments bidirectional level shifter. UART signals are connected directy to the STM32.

It is possible to run the Black Magic Probe firmware on your PC and have it bit bang using a USB attached FTDI MPSSE capable adapter. Programming speed is a little slower, but BMP development may be faster due to no firmware upload needed and the inherent debugging messages on the starting console.

You can compile the firmware for an ST Link debugger. These are often included on ST Discovery and Nucleo evaluation boards. You can replace the ST Link firmware on your discovery board with Black Magic Probe firmware. Usually this leads to more stable operation and easier use than the ST tools. There are several tutorials for how to do it even if you don’t have a JTAG adapter yet and no way to bootstrap. :)

For a generic STM32F103 board, look if the swlink platform can handle it. Swlink reuses the SWD pins. You can also follow these instructions for a solution to not reuse the SWD pins.

Restoring StlinkV2 BMP support with recent original ST firmware is a work in progress at the moment, according to the issue #504.

You can run the Black Magic Probe firmware on the “target” processor of an ST F4 discovery board. This among others useful if you want to bootstrap your F4 Discovery board ST Link programmer without having any other means of programming it.

This target is the programmer integrated on the STM8S Discovery board.

This target is the programmer integrated on the TI Launchpad board.